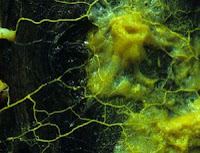 No, this is not a bad horror picture or another story from The Onion News. A team at the University of the West in England (UWE) has received 228,000 pounds in funding to engineer robots from single celled organisms. The target species of Andrew Adamatzky and his team is a slime mould (Physarum polycephalum) reports an article titled, Plasmobot: the slime mould robot, online at NewScientist.

Affectionately dubbed Plasmobot, it will be "programmed" using light and electromagnetic stimuli to trigger chemical reactions similar to a complex piece of chemistry called the Belousov-Zhabotinsky reaction, which Adamatzky previously used to build liquid logic gates for a synthetic brain. By understanding and manipulating these reactions, says Adamatzky, it should be possible to program Plasmobot to move in certain ways, to "pick up" objects by engulfing them and even assemble them. It should be possible to program it to move, to pick up objects and even assemble them. Initially, Plasmobot will work with and manipulate tiny pieces of foam, because they "easily float on the slime", says Adamatzky. The long-term aim is to use such robots to help assemble the components of micromachines.

Posted by Wendell Wallach at 6:22 AM