The Lifeboat Foundation is a nonprofit that seeks to protect people from some seriously catastrophic technology-related events. It funds research that would prevent a situation where technology has run amok, sort of like a pre-Fringe Unit.

The organization has a ton of areas that it’s looking into, ranging from artificial intelligence to asteroids. A particular interest for the group revolves around building shields and lots of them.

For example, there’s talk of a Neuroethics Shield – “to prevent abuse in the areas of neuropharmaceuticals, neurodevices, and neurodiagnostics. Worst cases include enslaving the world’s population or causing everyone to commit suicide.”

And then there’s a Personality Preserver that would help people keep their personalities intact and a Nano Shield to protect against overly aggressive nano creatures.

Read the full article by Ashless Vance titled, The Lifeboat Foundation: Battling Asteroids, Nanobots and A.I.
Posted by Wendell Wallach at 8:29 AM 1 comment:

REX, Wheelchair Bound Are Up And About With Robot Exoskeleton

Posted by Wendell Wallach at 8:23 AM No comments: 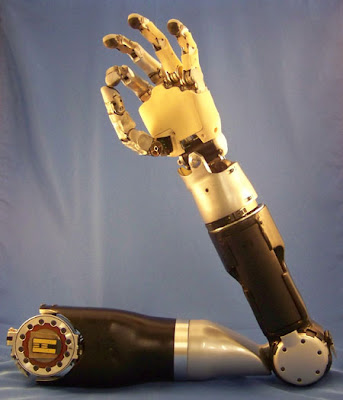 Read the full article titled, Thought-Controlled Prosthetic Limb System to be Tested on Humans.
Posted by Wendell Wallach at 8:15 AM No comments:

Two interesting reports about UAVs (unmanned aircraft) have be brought to our attention. One, written by Thomas P. Ehrhard, is titled, Air Force UAVs:The Secret History. Ehrhard is a Special Assistant to the Chief of Staff of the US Air Force. In an introduction, Rebecca Grant, Director of the Mitchell Institute for who the report was prepared, writes:

All along, there have been some tantalizing public hints about the extent of America's unmanned reconnaissance and surveillance work. What is striking, though, is how thoroughly the Air Force's secret role in UAV development remained "in the black world," unseen by any except those closest to the projects. The veil allowed speedy development of systems but gave the Air Force an undeserved reputation of indifference.

Of perhaps even more interest to readers of this blog, is a second report titled, Homeland Security: Unmanned Aerial Vehicles and Border Surveillance by Chad Haddal and Jeremiah Gertler. This discusses progress in using UAV's for surveillance along the U.S.'s international borders.

The technical capabilities of the UAVs have been tested in a military context, but safety and technical issues need to be addressed if the program is to be expanded domestically. Chief among these issues is the FAA’s concerns about the NAS and whether UAVs can be safely incorporated into the nation’s crowded skies. It has been noted that UAVs suffer accident rates multiple times higher than manned aircraft. However, in an effort to support the wars in Afghanistan and Iraq, DOD fielded UAVs such as Predator and Global Hawk before their development programs were complete. Thus, the UAV accident rate might be lower if these systems had been allowed to mature under the full development program.

Posted by Wendell Wallach at 7:43 AM No comments:

Ethical regulations on robotics in Europe

Abstract There are only a few ethical regulations that deal explicitly with robots, in contrast to a vast number of regulations, which may be applied. We will focus on ethical issues with regard to ‘‘responsibility and autonomous robots’’, ‘‘machines as a replacement for humans’’, and ‘‘tele-presence’’. Furthermore we will examine examples from special fields of application (medicine and healthcare, armed forces, and entertainment). We do not claim to present a complete list of ethical issue nor of regulations in the field of robotics, but we will demonstrate that there are legal challenges with regard to these issues.

The full paper by Michael Nagenborg, Rafael Capurro, Jutta Weber, and Christoph is published in AI & Society and available here.
Posted by Wendell Wallach at 6:48 AM No comments:

The European Commision under the 7th framework programme has funded ETICA, a consortium of universities to address the "EthicaI Issues of Emerging ICT Applications." The project website is located here.

The ETICA project will identify emerging Information and Communication Technologies (ICTs) and their potential application areas in order to analyse and evaluate ethical issues arising from these. By including a variety of stakeholders and disciplinary perspectives, it will grade and rank foreseeable ethical risks. Based on the study governance arrangements currently used to address ICT ethics in Europe, ETICA will recommend concrete governance structures to address the most salient ethical issues identified. These recommendations will form the basis of more general policy recommendations aimed at addressing ethical issues in emerging ICTs before or as they arise.

Taking an inclusive and interdisciplinary approach will ensure that ethical issues are identified early, recommendations will be viable and acceptable, and relevant policy suggestions will be developed. This will contribute to the larger aims of the Science in Society programme by developing democratic and open governance of ICT. Given the high importance of ICT to further a number of European policy goals, it is important that ethical issues are identified and addressed early. The provision of viable policy suggestions will have an impact well beyond the scientific community. Ethical issues have the potential to jeopardise the success of individual technical solutions. The acceptance of the scientific-technological basis of modern society requires that ethical questions are addressed openly and transparently. The ETICA project is therefore a contribution to the European Research Area and also to the quality of life of European citizens. Furthermore, ethical awareness can help the European ICT industry gain a competitive advantage over less sensitive competitors, thus contributing to the economic well-being of Europe.

ETICA also publishes a magazine titled EIEx:The Magazine of the European Innovation Exchange. Issue 3 is available here.
Posted by Wendell Wallach at 6:33 AM No comments:

A report in the The Daily Telegraph indicates that South Korea has redeployed robots capable of target acquisition and lethal fire along the North Korea border. Although not mentioned in this story, this is the South Koreans' second attempt to deploy border robots (see this previous blog post http://moralmachines.blogspot.com/2009/12/armin-krishnan-on-killer-robots.html)
Posted by Colin Allen at 4:57 AM No comments: 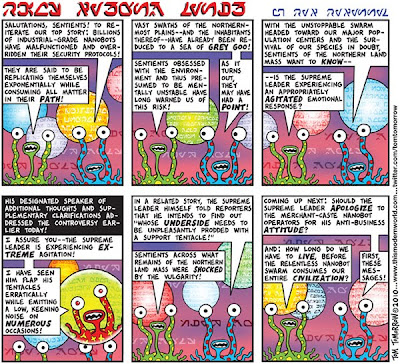 From Salon:
Posted by Wendell Wallach at 6:57 PM No comments:

Reach out and touch a virtual object

“The audiovisual aspects of VR have come a long way in recent years, so adding a sense of touch is the next step,” says Andreas Schweinberger, a researcher at Technische Universität Munchen in Germany. “We know that the more senses that can be used, the more interaction, the greater the sense of presence. And a stronger sense of presence means the experience is more immersive and realistic.”

Schweinberger led a team from nine universities and research institutes in developing technology to make VR objects and characters touchable. With funding from the EU in the Immersence project, they developed innovative haptic and multi-modal interfaces, new signal processing techniques and a pioneering method to generate VR objects from real-world objects in real time.

The latter technology, developed at the Computer Vision Laboratory of Swiss project partner ETH Zürich, uses a 3D scanner and advanced modelling system to create a virtual representation of a real object, such as a cup, box or, in one experiment, a green fluffy toy frog. The 3D digital representation of the object can then be transmitted to someone at a remote location, who, by wearing VR goggles and touching a haptic interface, can move, prod and poke it.

Read the full article here.
Posted by Wendell Wallach at 6:44 PM No comments:

Artificial Skin for Robots Can Make Them Safer 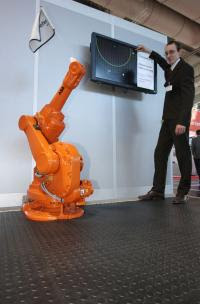 A mobile robot carefully transports a sample through a biotech lab where it is surrounded by the routine hustle and bustle. Lab technicians are conversing with one another and performing tests. One technician inadvertently runs into the robot, which stops moving immediately.

An artificial skin covering the robot makes this possible. Consisting of conductive foam, textiles and an intelligent evaluation circuit, the sensor system detects points of contact and differentiates between gentle and strong contact. It registers people immediately. The shape and size of the sensor cells implemented in the skin can be varied depending on the application. They detect any contact. The higher the number of sensor cells, the more precisely a point of collision can be detected. A sensor controller processes the measured values and transmits them to the robot or, alternatively, a computer, a machine or production line.

Researchers at the Fraunhofer Institute for Factory Operation and Automation IFF in Magdeburg designed and patented this sensor system in 2008 ..."Our artificial skin can be adapted to any complex geometry, including curved or very flat. We use large-area floor sensors to define safety zones that people may not enter", says Markus Fritzsche, researcher at the Fraunhofer IFF. "These areas can be changed dynamically."

Red the full article titled, Robots get an artificial skin.
Posted by Wendell Wallach at 6:36 PM No comments: 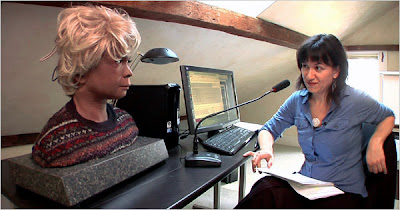 A robot head, commission by Martine Rothblatt, that emulates her spouse Bina Rothblatt, was featured in a NYTIMES article by Amy Harmon titled, Making Friends With a Robot Named Nina48. A video of Harmon interacting with Bina48 accompanies the article. The robot Bina lacks the charm of her living counterpart, but nevertheless, demonstrates a few beguiling trick that play upon the human tendency to anthropomorphize artifacts.

Harmon also has a companion piece in the NYTIMES titled, A Soft Spot for Circuitry, that discusses the proliferation of companion robots in nursing homes, schools, and even living rooms.

When something responds to us, we are built for our emotions to trigger, even when we are 110 percent certain that it is not human,” said Clifford Nass, a professor of computer science at Stanford University. “Which brings up the ethical question: Should you meet the needs of people with something that basically suckers them?”

An answer may lie in whether one signs on to be manipulated.”

Posted by Wendell Wallach at 5:54 PM No comments: