David Brooks on Catastrophic Complexity and the Oil Spill

David Brooks has a very good columnin the NYTIMES on the BP oil disaster titled, Drilling for Certainty.

Over the past years, we have seen smart people at Fannie Mae, Lehman Brothers, NASA and the C.I.A. make similarly catastrophic risk assessments. As Gladwell wrote in that 1996 essay, “We have constructed a world in which the potential for high-tech catastrophe is embedded in the fabric of day-to-day life.”

So it seems important, in the months ahead, to not only focus on mechanical ways to make drilling safer, but also more broadly on helping people deal with potentially catastrophic complexity. There must be ways to improve the choice architecture — to help people guard against risk creep, false security, groupthink, the good-news bias and all the rest.

This isn’t just about oil. It’s a challenge for people living in an imponderably complex technical society.

Posted by Wendell Wallach at 7:47 PM No comments:

Oil Spill as a Cautionary Tale

The difficulty in stopping the BP's oil leak in the gulf is turning into a cautionary tale about what we can expect from technology. The NYTIMES has a story on this titled, Our Fix-it Faith and the Oil Spill.

Americans have long had an unswerving belief that technology will save us — it is the cavalry coming over the hill, just as we are about to lose the battle. And yet, as Americans watched scientists struggle to plug the undersea well over the past month, it became apparent that our great belief in technology was perhaps misplaced.

“Americans have a lot of faith that over the long run technology will solve everything, a sense that somehow we’re going to find a way to fix it,” said Andrew Kohut, president of the Pew Research Center for the People and the Press. He said Pew polling in 1999 — before the September 2001 terror attacks — found that 64 percent of Americans pessimistically believed that a terrorist attack on the United States probably or definitely would happen. But they were naïvely optimistic about the fruits of technology: 81 percent said there would be a cure for cancer, 76 percent said we would put men on Mars.

Posted by Wendell Wallach at 1:07 AM No comments:

At the NPR News site, a story "Requiring Doctors To Justify Scans Reduces Waste" about a study in the June issue of Radiology in which doctors were required to log in to a computer to justify MRI scans when the computer determined, based on the specific patient's records, that the scan may not be diagnostically useful. How long until the machine issuing the challenge also takes into account whether the attending physician has a history of being more prone to go ahead and order the tests anyway?
Posted by Colin Allen at 5:39 PM No comments:

In this March 29, 2010, memorandum, U.S. Undersecretary of Defense Ashton Carter charges a task force with identifying "new opportunities for more aggressive applications of autonomy to U.S. military materiel" and suggests that pervasive autonomy in battlefield systems might hedge against the "net-centricity" of the increasingly networked systems currently being deployed.
Posted by Colin Allen at 2:30 AM No comments:

Not ready for prime time

NPR has coverage of the European Robot Trial event in Germany showcasing autonomous military vehicles and other robots. The headline touts the life-saving potential of such machines -- illustrating the logic that makes continued technological pursuit of the goal hard to resist. These are not combat machines, but robots for carrying supplies and other military support functions.  Nevertheless, the technological challenges are apparent: "We have seen progress, but not as much as we have wished for," said Dirk Ellinger, director of armaments at the German Defense Ministry.
Posted by Colin Allen at 9:10 AM No comments:

The Gender-Specific Sway of Virtual Humans

"Much evidence has accumulated showing that nonverbal behavior can have a profound impact on human judgment in ways we are hardly aware of and this research extends that work to the digital realm. This work demonstrates that presentational factors influence people's decisions, including decisions of moral and ethical consequence, presumably without their realizing it," said study co-author Karl F. MacDorman, Ph.D., an associate professor in the Human-Computer Interaction Program at the School of Informatics. He is also an adjunct associate professor with the Purdue School of Engineering and Technology at IUPUI.

In the study, a simulated female character presented participants with an ethical dilemma related to sexual conduct and marital infidelity. The character's human photorealism and motion quality were varied in four ways. The changes had no significant effect on female viewers, while male viewers were much more likely to rule against the character when her visual appearance was obviously computer generated and her movements were jerky.

Colin noticed something that will be particularly funny for readers of this blog. He was reviewing Amazon's listing today for:

"You ain't lettin' that ROE robot in my garden. I don't care how may terrorists it keeps out."
Posted by Wendell Wallach at 9:23 PM No comments:

The computer systems used to control modern cars are very vulnerable to attack, say experts. An investigation by security researchers found the systems to be "fragile" and easily subverted. The researchers showed how to kill a car engine remotely, turn off the brakes so the car would not stop and make instruments give false readings. Despite their success, the team said it would be hard for malicious attackers to reproduce their work. 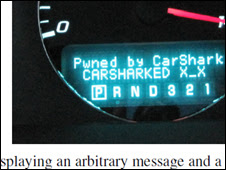 "Cars benefit from the fact that they are (hopefully) not connected to the internet (yet) and currently are not able to be remotely accessed," said Rik Fergson, a security analyst at Trend Micro. "So in order to carry out a successful attack you would already need to have physical access to the vehicle, as a break-in or as a mechanic, seem the two most likely scenarios."

"As cars, and everything else in life up to and including even pacemakers or fridges, become steadily more connected and externally accessible, research such as this should be taken increasingly seriously by manufacturers," he added.

The NYTIMES is reporting today that:

American drone aircraft fired 18 missiles at militants in Pakistan’s North Waziristan tribal region on Tuesday, killing at least 14 fighters and wounding four, a security official and a resident of the area said.

the attack by the American drones, which are operated by the Central Intelligence Agency, appeared to be a continuation of the air campaign to degrade the capabilities of Al Qaeda, the Pakistani Taliban and the Afghan Taliban fighters now working together in North Waziristan. There have been more than 30 drone attacks against militants in the tribal areas in 2010, almost all of them in North Waziristan.

The full article titled, Drone Strikes Pound West Pakistan, is available here.
Posted by Wendell Wallach at 8:59 AM No comments:

The idea of a robot in the kitchen cooking us meals sounds great. We better just watch out for that swinging knife.

To find out what would happen if a robot handling a sharp tool accidentally struck a person, German researchers set out to perform a series of stabbing, puncturing, and cutting experiments.

The main goal of the study was to understand the biomechanics of soft-tissue injury caused by a knife-wielding robot. But the researchers also wanted to design and test a collision-detection system that could prevent or at least minimize injury. Apparently the system worked so well that in some cases the researchers were willing to try it on human subjects.

IEEE Spectrum reports on this research in an article titled, Robots With Knives: A Study of Soft-Tissue Injury in Robotics.


Posted by Wendell Wallach at 4:46 PM No comments: