Pilots, flying Predator drones directed at targets in Afghanistan and Iraq from the safety of Nellis Air Force Base in Nevada, "are at least as fatigued as crews deployed to Iraq." This is among the findings presented in a series of reports by Air Force Lt. Col. Anthony P. Tvaryanas. Teleoperating drones apparently leads to higher fatigue for the crew than actually manning an Awacs surveillance plane.

Tvaryanas speculates that "sensory isolation" from the immediate feedback of being in a plane contributes to the mental exhaustion of the teleoperators. He also examined 95 mishaps and safety incidents with the Predator. Tvaryanas reported that 57% of the crew-member-related incidents were "consistent with situation awareness errors associated with perception of the environment." In other words, people are poor at grasping an environment in which they are not actually located. Researches stressing the importance of embodied cognition will appreciate these findings. They are also likely to foster an interest in making drones more autonomous in the hopes of decreasing mishaps arising from errors caused by remote crew members.

The New York Times Magazine reported on this research in their December 14th 2005 article on the "Year in Ideas."
Posted by Wendell Wallach at 7:17 AM No comments:

Brenda Ann Burke has an article at suite101.com on Programming the Perfect Soldier: The Ethics of "Autonomous" Lethal Robots that nicely summarizes several recent books touching on the ethics of military robots.

We apply the "Page 99 Test " to Moral Machines at page99test.blogspot.com.

You can read p.99 of Moral Machines here.

"Open the book to page ninety-nine and read, and the quality of the whole will be revealed to you." --Ford Madox Ford

Posted by Colin Allen at 5:54 PM No comments:

Next on our agenda: Encouraging people to read the book, not just reacting only to the sensationalized media reports!


Here's an example of what we mean:

“A British robotics expert has been recruited by the US Navy to advise them on building robots that do not violate the Geneva Conventions.”

Excellent. My hope is that he is an engineer. What is needed is a coding of the Geneva Convention that engineers can easily use as design requirements. Better still if there's a version that computer programs can understand. If the product of the work is not specifically geared toward technical development activities, then it's unlikely to be any more useful than the original Convention documents. Getting robots to understand the rules of war a useful idea, though not a complete capability for an ethical robot.

We've dashed the hope raised by that Telegraph headline already, but we're also not advocating for "getting robots to understand the rules of war, either as a complete solution to AMAs, or even as a practical approach for battlefield robots.

A fuII day workshop on Roboethics has been announced for May 19th at ICRA2009, the 2009 IEEE International Conference on Robotics and Automation in Kobe Japan. Those wishing to present at this gathering should submit abstract by January 14th. The organizers of the workshop include Gianmarco Veruggio, Ron Arkin, Atsuo Takanishi, Jorge Solis, Matthias Scheutz, and Fiorella Operato. The call for papers states that,

A call for papers has been put out for a two day symposium (April 6-7) at AISB '09. The symposium is titled, "Killer Robots or Friendly Fridges: the Social Understanding of Artificial Intelligence." Abstracts should be submitted by December 19th.

For the non-specialist, the whole notion of Artificial Intelligence challenges fundamental understandings of what it is to be human, with enormous implications for how we conceive ourselves, our artefacts and our societies. AI's foundational goal was the construction of autonomous sentience. Yet, 55 years after Turing's seminal paper, publicly visible achievements, beyond science fiction speculations or media exaggerations, still lie in faltering steps in voice and image recognition, surveillance, computer games and virtual environments, not in truly intelligent everyday machines.
This symposium will offer a major forum for the discussion of the social understanding of Artificial Intelligence, in particular the curious spaces between popular expectations of machines that meet our every whim, fears of humans enslaved or eliminated by crazed super-brains, and the sober reality of toasters that still burn the bread.

At the start of the 21st century, it is timely to reflect not just on the technical achievements and pitfalls of the now mature discipline of Artificial Intelligence, but also on its wider social understanding. While there have always been ill-informed concerns about "robots taking over the world", the reality is both more prosaic and more complex. People have long anthropomorphised complex artefacts which are capable of seemingly autonomous interaction. However, recent advances in the deployment of believable characters and affective systems, both in graphical and robotic form, have rekindled problematic social and ethical questions about our relationships with machines.

This symposium offers a fresh opportunity for interdisciplinary perspectives on the social understanding of Artificial Intelligence, with the strong potential to bring together contemporary research in key technical, social, psychological and philosophical domains
Posted by Wendell Wallach at 7:57 AM No comments:

Last Tuesday, Colin had the opportunity to interview the CTO of MNB Technologies, a Bloomington, Indiana, company that is developing wearable supercomputers for military and other applications. (Colin is an occasional host of Interchange, on WFHB community radio in Bloomington.) Listen here.

Host Colin Allen speaks with Nick Granny, chairman and chief technical office of MNB Technologies, Inc., a hi-tech startup company based in Bloomington, Indiana. They discuss the advances that MNB is making in designing and developing "wearable supercomputers" and the kinds of applications that these highly portable machines will enable, including military training with virtual reality, homeland security applications, medical triage at disaster sites, and civilian applications such as real-time route planning for delivery drivers, and even the download and use of satellite data for efficient farming. Colin and Nick also discuss how MNB Technologies came to be located in Bloomington, which involved a chance meeting with his future wife and business partner Martina Barnas at the Paris airport, and Nick describes how the State of Indiana supports small businesses, making it possible for MNB Technologies to have ambitious expansion plans over the next few years. (57:29)
Posted by Colin Allen at 8:21 AM No comments:

Posted by Colin Allen at 8:03 AM No comments:

Noel Sharkey also moderates the AUVSI Forum of the Association for Unmanned Vehicle Systems International.
Posted by Colin Allen at 5:58 AM No comments:

Germany's Der Spiegel is running a story "Pentagon plant rücksichtsvolle Kampfroboter" which nicely synthesizes material from a variety of sources, including the NY TImes and Telegraph. They also link to a 2005 story on a Canadian project concerning robot etiquette.
Posted by Colin Allen at 8:39 AM No comments: 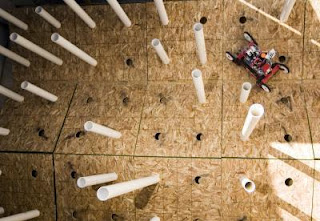 More than three dozen rescue robots were gathered at a testing site in Disaster City, Texas. The rescue robot exercise was held by The National Institute of Standards and Technology (NIST) to help develop a standard suite of performance tests for evaluating mechanical rescuers. The Department of Homeland Security's Science and Technology Directorite sponsored this exercise at a testing facility that offers an airstrip, lakes, train wrecks and rubble piles. Establishing a standard for rescue robots is necessary to evaluate one model against others. Read the full story titled, "Rescue Robot Exercise Brings Together Robots, Developers, First Responders" at ScienceDaily.
Posted by Wendell Wallach at 5:36 AM 1 comment:

Could Robots Take Over the World?

From the St. Petersburg Times by Ben Montgomery

"It feels a bit like the End Times these days, what with assault rifles flying off the shelves and the markets swinging and the honeybees dying and the national deficit growing and the polar ice caps melting and wars raging and the missionaries from the panhandle cults filling our mailboxes with doomsday lit. ..." continue at St. Pete Times

Story quotes Wendell: "Robots and computer systems are all over the place and making all kinds of decisions," Wallach says on the phone. "And the machines are getting more and more autonomous."
Posted by Colin Allen at 5:39 PM No comments: