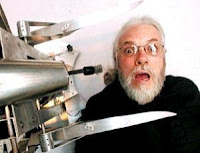 In the spirit of sensationalism, NewScientist published an interview of Noel Sharkey under the title, Why AI is a dangerous dream.

Are we close to building a machine that can meaningfully be described as sentient?

I'm an empirical kind of guy, and there is just no evidence of an artificial toehold in sentience. It is often forgotten that the idea of mind or brain as computational is merely an assumption, not a truth. When I point this out to "believers" in the computational theory of mind, some of their arguments are almost religious. They say, "What else could there be? Do you think mind is supernatural?" But accepting mind as a physical entity does not tell us what kind of physical entity it is. It could be a physical system that cannot be recreated by a computer.

Posted by Wendell Wallach at 7:35 PM