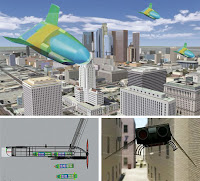 Two recent articles have reported on the Air Force's plans for the next generation of UAVs. Michael Hoffman reports on The Plan for smaller, faster, deadlier UAVs on the AirForceTimes Website.

The Esquire magazine website has an article by Erik Sofge titled, Inside the Pentagon's New Plan for Drones That Don't Piss Off Pakistan.

the Air Force is planning to build a more selective breed of military drones, with swarms of bird-size bots shadowing targets and new unmanned aerial vehicles (UAVs) capable of launching mini-missiles at multiple targets at once. The mechanized assassin, it seems, is about to become a lot more professional.

Like most UAVs, these robots would most likely be used for surveillance and reconnaissance. But in an animated clip released by the Air Force late last year, a MAV lands on an enemy sniper, and, without so much as a prayer to its machine god, detonates itself. The new Air Force briefing doesn't elaborate on this miniature suicide-bomber concept, but it does include plans to have flocks of sparrow-size MAVs airborne by 2015, and even smaller, dragonfly-size robots by 2030. And with the recent news that Israel is developing an explosives-laden snakebot, the writing is on the wall: You can run from tomorrow's robotic hitmen, and you can hide, and they'll flap or squirm or glide into position and kill you anyway.

Posted by Wendell Wallach at 6:46 PM