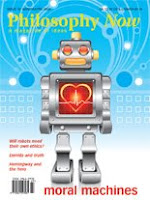 Machine Morality is the topic featured in the March/April issue of Philosophy Now Magazine . Wendell Wallach was invited to be the editor of this special issue, which includes contributions from James Moor, Susan and Michael Anderson, Steve Torrance, Tom Powers, and Joel Marks. The articles are:

The Conscience Of The Machine (Editor's Letter) by Wendell Wallach

The Challenge of Moral Machines: Wendell Wallach tells us what the basic problems are.

How Machines Can Advance Ethics: Susan Leigh Anderson and Michael Anderson relate how their attempts to build ethical machines have advanced their understanding of ethics.

Machines and Moral Reasoning: Thomas M. Powers on how a computer might process Kant’s moral imperative.

Will Robots Need Their Own Ethics? Steve Torrance asks if robots need minds to be moral producers or moral consumers.

Man in the Middle: Animals, Humans and Robots by Joel Marks
Posted by Wendell Wallach at 8:57 PM