A Robot with an Organic Brain 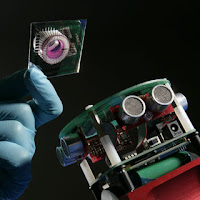 Kevin Warwick has been building a robot with a biological brain in his laboratory at the University of Reading. Seed Magazine reports in a March 30th article titled," Researchers Have Developed a Robot Capable of Learning and Interacting with the World Using a Biological Brain" that Warwick's team spread rat neurons onto a chip with an array of electrodes. The neurons began to form connections with each other in what is described as a very simple brain.

For the next week the team fed the developing brain a liquid containing nutrients and minerals. And once the neurons established a network sufficiently capable of responding to electrical inputs from the electrode array, they connected the newly formed brain to a simple robot body consisting of two wheels and a sonar sensor.

According the the report the robot learned to avoid obstacles in its course through Hebbian learning, the strengthing and weakening of synaptic connections between the neurons.
Posted by Wendell Wallach at 1:42 PM