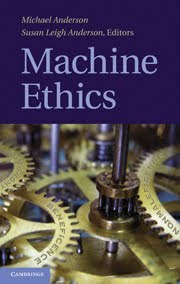 The new field of machine ethics is concerned with giving machines ethical principles, or a procedure for discovering a way to resolve the ethical dilemmas they might encounter, enabling them to function in an ethically responsible manner through their own ethical decision making. Developing ethics for machines, in contrast to developing ethics for human beings who use machines, is by its nature an interdisciplinary endeavor. The essays in this volume represent the first steps by philosophers and artificial intelligence researchers toward explaining why it is necessary to add an ethical dimension to machines that function autonomously, what is required in order to add this dimension, philosophical and practical challenges to the machine ethics project, various approaches that could be considered in attempting to add an ethical dimension to machines, work that has been done to date in implementing these approaches, and visions of the future of machine ethics research.

Machine Ethics can be purchased from Amazon here.
Posted by Wendell Wallach at 8:22 AM


what is a robot