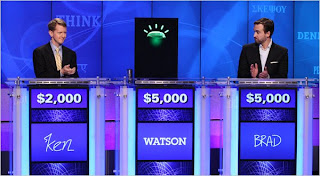 John Markoff reports on the follow-up for IBM after the Watson win in a New York Times article titled, Computer Wins on ‘Jeopardy!’: Trivial, It’s Not.

For I.B.M., the showdown was not merely a well-publicized stunt and a $1 million prize, but proof that the company has taken a big step toward a world in which intelligent machines will understand and respond to humans, and perhaps inevitably, replace some of them.

Watson, specifically, is a “question answering machine” of a type that artificial intelligence researchers have struggled with for decades — a computer akin to the one on “Star Trek” that can understand questions posed in natural language and answer them.

Watson showed itself to be imperfect, but researchers at I.B.M. and other companies are already developing uses for Watson’s technologies that could have a significant impact on the way doctors practice and consumers buy products.

Posted by Wendell Wallach at 9:07 PM

Doug Hoftstadter, David Gondek (IBM) and others discuss what it all really means on To The Point

what is a robot