Beware of the DARPA Cheetah-Bot 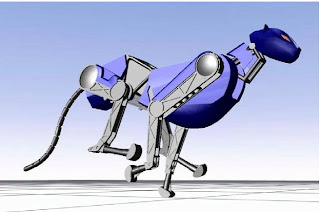 The Cheeth-Bot is just one of the new robots being developed by Boston Dynamics, the creators of Big-Dog.

As the name implies, Cheetah is designed to be a four-legged robot with a flexible spine and articulated head (and potentially a tail) that runs faster than the fastest human. In addition to raw speed, Cheetah’s makers promise that it will have the agility to make tight turns so that it can “zigzag to chase and evade” and be able to stop on a dime.

Aside from its unspecified military applications, Cheetah’s makers see it galloping to the rescue and building a brave new future in the fields of “emergency response, firefighting, advanced agriculture and vehicular travel.”

Read the full article from WIRED on Boston Dynamics here.
Posted by Wendell Wallach at 6:14 AM