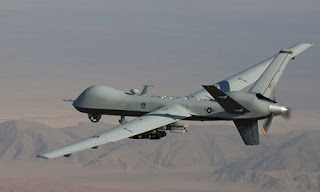 A story in the Guardian titled, Attack of the drones, discusses criticisms of the roboticization of warfare from the International Committee for Robot Arms Control (ICRAC) and other groups. What may be new to some readers of this blog is the many civilizations applications of drone technology mentioned in the article.

But interest in UAVs is not limited to the military. Advances in remote control, digital imagery and miniaturised circuitry mean the skies might one day be full of commercial and security drones.

They're already being used by the UK police, with microdrones deployed to monitor the V festival in Staffordshire in 2007. Fire brigades send similar machines to hover above major blazes, feeding images back to their control rooms. And civilian spin-offs include cheaper aerial photography, airborne border patrols and safety inspections of high-rise buildings.

Posted by Wendell Wallach at 6:44 AM

what is a robot