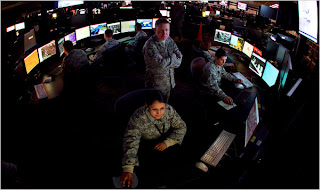 In New Military, Data Overload Can Be Deadly.

When military investigators looked into an attack by American helicopters last February that left 23 Afghan civilians dead, they found that the operator of a Predator drone had failed to pass along crucial information about the makeup of a gathering crowd of villagers.

But Air Force and Army officials now say there was also an underlying cause for that mistake: information overload.

At an Air Force base in Nevada, the drone operator and his team struggled to work out what was happening in the village, where a convoy was forming. They had to monitor the drone’s video feeds while participating in dozens of instant-message and radio exchanges with intelligence analysts and troops on the ground.

There were solid reports that the group included children, but the team did not adequately focus on them amid the swirl of data — much like a cubicle worker who loses track of an important e-mail under the mounting pile. The team was under intense pressure to protect American forces nearby, and in the end it determined, incorrectly, that the villagers’ convoy posed an imminent threat, resulting in one of the worst losses of civilian lives in the war in Afghanistan.

Note that the the monitoring station of video from Afghanistan at Langley Air Force Base pictured on the right has been nicknamed "Death TV."
Posted by Wendell Wallach at 7:13 AM