Prosthetic Limbs Interfaced with the Brain 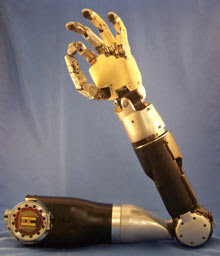 Technology Review reports that DARPA financed prosthetic arms designed by two different manufacturers that have brain interfaces. The prosthetic limbs should be available within 5-10 years. One of the devices was developed by DEKA Research and Development the other by the Applied Physics Laboratory (APL) at John Hopkins University.

Limited testing of neural implants in severely paralyzed patients has been underway for the last five years. About five people have been implanted with chips to date, and they have been able to control cursors on a computer screen, drive a wheelchair, and even open and close a gripper on a very simple robotic arm. More extensive testing in monkeys implanted with a cortical chip shows the animals can learn to control a relatively simple prosthetic arm in a useful way, using it to grab and eat a piece of marshmallow.
"The next big step is asking, how many dimensions can you control?" says John Donoghue, a neuroscientist at Brown University who develops brain-computer interfaces. "Reaching out for water and bringing it to the mouth takes about seven degrees of freedom. The whole arm has on order of 25 degrees of freedom." Donoghue's group, which has overseen previous tests of cortical implants in patients, now has two paralyzed volunteers testing the DEKA arm. Researchers at APL have developed a second prosthetic arm with an even greater repertoire of possible movements and have applied for permission to begin human tests. They aim to begin implanting spinal cord injury patients in 2011, in collaboration with scientists at the University of Pittsburgh and Caltech.

Read the full story by Emily Singer titled, Robotic Limbs that Plug Into the Brain: Scientists are testing whether brain signals can control sophisticated prosthetic arms.
Posted by Wendell Wallach at 12:50 PM