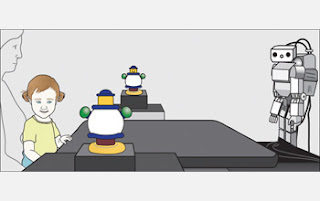 The NSF website has an article of interest titled, Babies Learn From Robots While Robots Learn From Babies: Interdisciplinary research combines infant learning and computer science

The study indicates that more than appearance, robots will need to possess sophisticated cognitive abilities such as being able to understand speech and imitate human actions in order to pass the test of human social acceptance. The specific set of movements or gestures a robot should have will depend on a number of factors such as the domain in which it operates--whether the robot is an emergency responder or a child's tutor, for example. Programming for local culture also is important for determining whether humans will interact with it.

"Some skills such as being able to interact through speech and understand a human's intentions are universally applicable to all robots that interact with humans," said Rao. "Other skills will need to be learned on-the-fly, which is one of the reasons why we have focused our robotics research on learning by imitating humans."

Posted by Wendell Wallach at 9:29 AM