Stanford Law School and the Robots 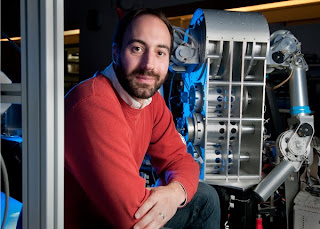 Stanford University News carries an article by Adam Gorlick titled, As robots become more common, Stanford experts consider the legal challenges. There is a particular emphasis in this article on protecting the manufacturers who build the robots.

"I worry that in the absence of some good, up-front thought about the question of liability, we'll have some high-profile cases that will turn the public against robots or chill innovation and make it less likely for engineers to go into the field and less likely for capital to flow in the area," said M. Ryan Calo, a residential fellow at the Law School's Center for Internet and Society.

And the consequence of a flood of lawsuits, he said, is that the United States will fall behind other countries – like Japan and South Korea – that are also at the forefront of personal robot technology, a field that some analysts expect to exceed $5 billion in annual sales by 2015.

"We're going to need to think about how to immunize manufacturers from lawsuits in appropriate circumstances," Calo said, adding that defense contractors are usually shielded from liability when the robots and machines they make for the military accidentally injure a soldier.

"If we don't do that, we're going to move too slowly in development," Calo said. "When something goes wrong, people are going to go after the deep pockets of the manufacturer."

Posted by Wendell Wallach at 5:06 PM