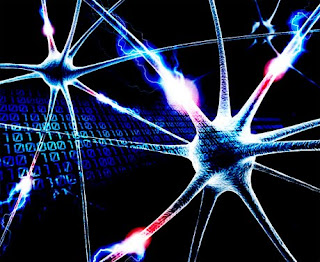 The capacity of the new brain simulator introduced by IBM exceeds the number of neurons and synapses in a cat's brain. The cortical simulator, called C2, recreates roughly 1 billion neurons connected by 10 trillion individual synapses. IEEE Spectrum carries an article on this new research platform titled, IBM Unveils a New Brain Simulator: A big step forward in a project that aims for thinking chips.

“Each neuron in the network is a faithful reproduction of what we now know about neurons,” [Jim Old] says. This in itself is an enormous step forward for neuroscience, but it also allows neuroscientists to do what they have not previously been able to do: rapidly test their own hypotheses on an accurate replica of the brain.

While the introduction of the simulator indicates that computer scientists are on track to build a simulator with the synaptic capacity of the human brain by 2019, it also suggests drawbacks in this approach for building supercomputers with human-level intelligence.

A major problem is power consumption. Dawn is one of the most powerful and power-efficient supercomputers in the world, but it takes 500 seconds for it to simulate 5 seconds of brain activity, and it consumes 1.4 MW. Extrapolating from today’s technology trends, IBM projects that the 2019 human-scale simulation, running in real time, would require a dedicated nuclear power plant.

Posted by Wendell Wallach at 7:12 PM

I do not understand why the neocortex is a mystery to everyone. Its neuron net circuit is repeated throughout the cortex. It consists of excitatory and inhibitory neurons whose functions, each, have been known for decades. The neuron net circuit is repeated over layers whose axonal outputs feed on as inputs to other layers. The neurons of each layer, each receive axonal inputs from one or more sending layers and all that they can do is correlate the axonal input stimulus pattern with their axonal connection pattern from those inputs and produce an output frequency related to the resultant psps. Axonal growth toward a neuron is definitely the mechanism for permanent memory formation and it is just what is needed to implement conditioned reflex learning. This axonal growth must be under the control of the glial cells and must be a function of the signals surrounding the neurons. However, neurons need to do normalized cross correlations and need to recognize patterns. This requires the inclusion of the inhibitory neuron in the structure to complete the definition of the neocortex.