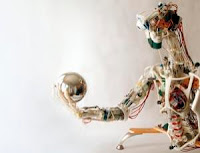 Owen Holland and his team have been receiving some publicity lately for their latest iteration of Chronos, a robot with a human-like skeletal structure. Owen, a champion of the prospects for building machines with consciousness, draws on the theories of the German philosopher Thomas Metzinger in his attempts to built embodied robots that move through and potentially experience the world in a manner similar to that of humans. His hope is that in slowly adding features to such a platform not only functional but also phenomenal consciousness might emerge in the system. A recent report on Holland's research was made in an article published by New Scientist titled, Robot with bones moves like you. The article includes a video of Chronos.

Click here for further information on the Chronos Project..

While philosophers such as Steve Torrance believe that phenomenal consciousness will be necessary for developing robots with
moral intelligence, it is very difficult to express why this will be the case. We welcome, and will post on this blog, thoughts on the role of consciousness in the decision making processes of moral machines.
Posted by Wendell Wallach at 5:33 AM