Sunday NYTimes: Why is this robot story on the front page? 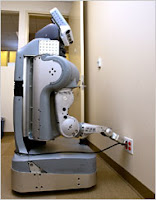 It is curious why a robot feature titled, Ay Robot! Scientists Worry Machines May Outsmart Man found its way onto the front page of the July 26th New York Times. The story is about a group of scientists who met on February 25th at the Asilomar Conference Grounds and will release a report later this year (when?) about their concerns over social challenges arising from research on artificial intelligence. Given the location, the site for a famous 1975 meeting and report on genomics, the conference may be seen as of symbolic importance. The AAAI organized the event, so perhaps the group includes many luminaries, but they are not listed in the article. Eric Horovitz, the organizer and Microsoft research who is presently president of the the AAAI, and Tom Mitchell of Carnegie Mellon University are the only attendees either mentioned or quoted in the article. Mitchell's reflections are of particular interest to readers of this blog.

Tom Mitchell, a professor of artificial intelligence and machine learning at Carnegie Mellon University, said the February meeting had changed his thinking. “I went in very optimistic about the future of A.I. and thinking that Bill Joy and Ray Kurzweil were far off in their predictions,” he said. But, he added, “The meeting made me want to be more outspoken about these issues and in particular be outspoken about the vast amounts of data collected about our personal lives.”

I am not surprised that John Markoff wrote this features as he has been covering such concerns for a long time. But, for those of us with a long-standing interest in challenges arising from advanced research on AI, it is quite confusing as to why the editors of the newspaper decided to feature this story on the front page at this time given that there is no immediate news here.
Posted by Wendell Wallach at 7:43 AM

I was wondering about that too. I figured it was because they wanted to put the picture of the robot plugging itself in one day when there was no better cover picture, because it *is* pretty evocative, even though it's a bit of cheap trick.

It's both funny and sad that most people think robots can already build other robots, but it never occurred to them that they might plug themselves in.

As you point out, it could be seen as just a flashy way to get information privacy on the front page again. Good newspapers do may concerted campaigns to get people to care about important things.

An summary report from the panel chairs is at the site:
https://www.aaai.org/Organization/presidential-panel.php