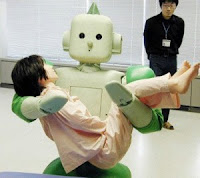 The robot Kenji at Toshiba's Akimu Robotic Research Institute was programmed by Dr. Akito Takahashi and his team to emulate certain human emotions, including love. However, Kenji began to display surprising behavior. The robot held a young female intern within its lab enclosure for a few hours, until she was freed by senior staff members. MuckFlash reports on Kenji in a posting titled, "Robot Programmed to Love Goes to Far."

“Despite our initial enthusiasm, it has become clear that Kenji’s impulses and behavior are not entirely rational or genuine,” conceded Dr. Takahashi.
Ever since that incident, each time Kenji is re-activated, he instantaneously bonds with the first technician to meet his gaze and rushes to embrace them with his two 100kg hydraulic arms. It doesn’t help that Kenji uses only pre-recorded dog and cat noises to communicate and is able to vocalize his love through a 20 watt speaker in his chest.
Dr. Takahashi admits that they will more than likely have to decommission Kenji permanently, but he’s optimistic about one day succeeding where Kenji failed.
Posted by Wendell Wallach at 7:13 PM