Is a Robot Crime Wave on the Near Horizon? 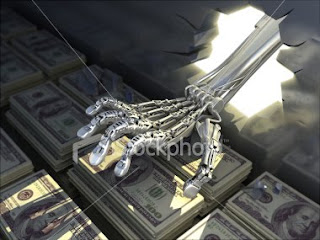 The Coming Robot Crime Wave is an article by Noel Sharkey, Marc Goodman, and Nick Ross, which outlines a number of ways in which present and future robotic systems will be adapted to perpetrate a wide variety of illegal activities. One example they discuss is Narco submarines.

Major criminal organizations such as drug cartels don’t need to rely on cheap home engineering. Discoveries of submarines designed to carry tons of narcotics have been occurring since 1988. With 10 tons of cocaine netting $200 million, $2 million for a submarine would repay the robot’s cost many times over in one voyage. The drug cartels clearly have the money to adapt their technology to keep ahead of enforcement agencies.

Once the exclusive and secretive preserve of the military, this technology is becoming commonplace in civilian applications, with marine robots a prime example. So far, they’ve been used to locate the Titanic, investigate ice caps, build deep sea oil rigs, repair undersea cables, and mitigate environmental catastrophes such as the recent Deepwater Horizon explosion in the Gulf of Mexico.

In 2010, US officials secured the first convictions for remote-controlled drug smuggling when they imprisoned three men for building and selling drug subs (http://bit.ly/ b8Qawc). At the Tampa hearing, attorney Joseph K. Ruddy reported that these remote-controlled submarines were up to 40 feet long and could carry 1,800 kilograms of cocaine 1,000 miles without refueling. The effectiveness of these submarines in avoiding detection is clear, given that none have ever been seized. We only hear about the criminals’ failures, so there could be none, dozens, or hundreds of these machines in use.

The latest autonomous and semiautonomous submarine capabilities pose a greater concern. They can act on their own when required, employ programmed avoidance routines to thwart authorities, be fitted with sensors to send signals to the operator when the payload is delivered or the craft attacked, and carry self-destruct features to destroy incriminating evidence.

Posted by Wendell Wallach at 5:23 PM

Thank you so much for posting our article on Robot Crime on your blog. It is much appreciated. In case your readers are further interested in the theme of robots and crime, they can find more information on our Future Crimes site (www.futurecrimes.com).

Thanks for your innovative and interesting work in this field.