The Road to Minority Report 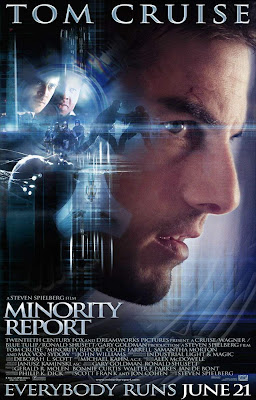 An article by Charles Arthur in the Guardian discusses,

Why Minority Report was spot on.

Pre-crime
In the film, "pre-cogs" can look into the future and inform the police (they have got no choice – they are stuck in baths in the basement). In 2008, Portsmouth city council installed CCTV linked to software that would note whether people were walking suspiciously slowly. University researchers had already realised in 2001 that, if you recorded the walking paths of people in car parks, you could spot the would-be thieves simply: they didn't walk directly to a car, but instead ambled around with no apparent target. That is because, unlike everyone else in a car park, they weren't going to their own car.

That's not the end: Nick Malleson, a researcher at the University of Leeds, has built a system that can predict the likelihood of a house being broken into, based on how close it is to routes that potential burglars might take around the city; he is meeting Leeds council this week to discuss how to use it in new housing developments, to reduce the chances of break-ins. So although pre-crime systems can't quite predict murder yet, it may only be a matter of time.

Spider robots
The US military is developing "insect robots", with the help of British Aerospace. They actually have eight legs (so, really, arachnid robots) and will be able to reconnoitre dangerous areas where you don't want to send a human, such as potentially occupied houses.

"Our ultimate goal is to develop technologies that will give our soldiers another set of eyes and ears for use in urban environments and complex terrain; places where they cannot go or where it would be too dangerous," Bill Devine, advanced concepts manager with BAE Systems, told World Military Forum. Give it 10 years and they will be there.

Posted by Wendell Wallach at 5:11 AM